Marmara Sea, Princess’ Island (Buyukada) are the popular tourist places in Istanbul, Turkey. Marmara Sea is the world’s smallest inland sea within the boundaries of Turkey. Whereas the Princess’ Island is the cluster of nine islands in it.

Marmara means marble, derived from Greek Language. The name of the sea is backed by the name of the island, Marmara Island which is a rich source of marble.

:a cluster of nine islands in the Sea of Marmara, and Buyukada is one of them. Buyukada is the biggest and the most favorite island among the nine. During the Byzantine period the Royal princes and empresses were exiled in these islands and hence these are called Princes’ islands. From the Ottoman era, the rich people came to the islands and built their beautiful wooden houses.

:it is the largest and most popular island among the nine princes’ islands as a tourist destination. The island is full of beautiful houses and historical buildings, churches, monasteries and mosques, by the Romans, Greek, Ottomans and others from time to time, one must say the beauty of these island lies in those buildings and their gardens. What my feeling was- if I could make a photo of each and every houses and buildings..
Wherever you see, all reflect only the fine tuned living standards of those rich Ottomans and the others who built the buildings. The present regulations prohibit any kind of motorized vehicles except of those belong to Municipality  and Police departments. In Buyukada island traffic means the bicycles and horse drawn carts and few electric rickshaws. To own a electric rickshaw one needs to acquire the permission from the authority with strong and valid reasons. 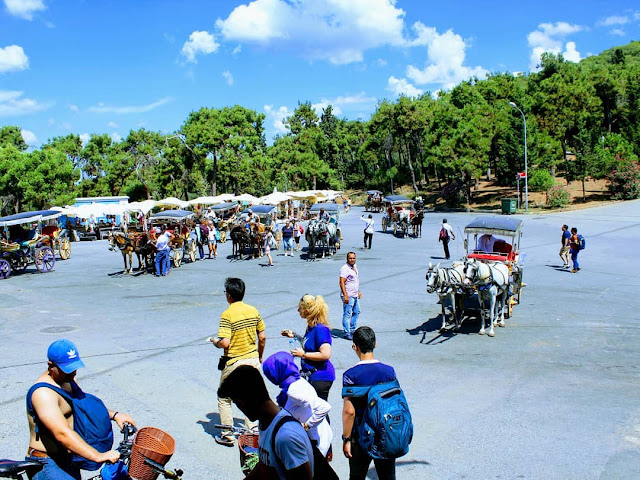 Here in Istanbul, all restaurants maintain almost the same kind of seating arrangements with service boys having same kind of uniform; white shirts, black trousers and well polished black shoes. When everything in the outdoor is clean enough, definitely the same cleanliness and hygiene is also there in the restaurants as well. This can clearly be imagined from the simple example of fish selling counters. Fishes are displayed in glass boxes in  such a way, as if not for sale or eat but for decoration only (at least we felt so😆)
We had our time in Buyukada till the lunch, but I will suggest spend a whole day and night at least to feel and  enjoy this beautiful Island.

:it is the natural strait connecting the Black sea and the sea of Marmara and divides Istanbul into two geographical parts- European Istanbul and Asian Istanbul. The two continental parts of Istanbul are connected by three bridges on Bosporus. It is one of the busiest waterways in the world, being equally important for international trade and tourism as it connects to many other major sea ports of the world mainly in Russia and Asia transporting energy to Europe.
On both sides of the straits there are residences of rich Turkish, Ottoman palaces, fortresses, old wooden villas, parks and gardens, restaurants, cafeterias and many more and as the evening arrives, both the shores along with the bridges get illuminated with different colored lights. It is a major tourist  destination for cruising and fishing.

Dear friends, thanks for reading. Your suggestions and views for improvement are highly appreciated. Do comment in the below box and share among other readers if you found it eligible to share.
Regards
Dipmoina Dowarah
Views: 132

I won’t believe, if you say you are not jealous

What does it come to your mind when you travel to

6km hike in the farm lands across majuli lakhimpu

"There are more Ebbs and Flows in our Mind than th

From a beach of Puduchery